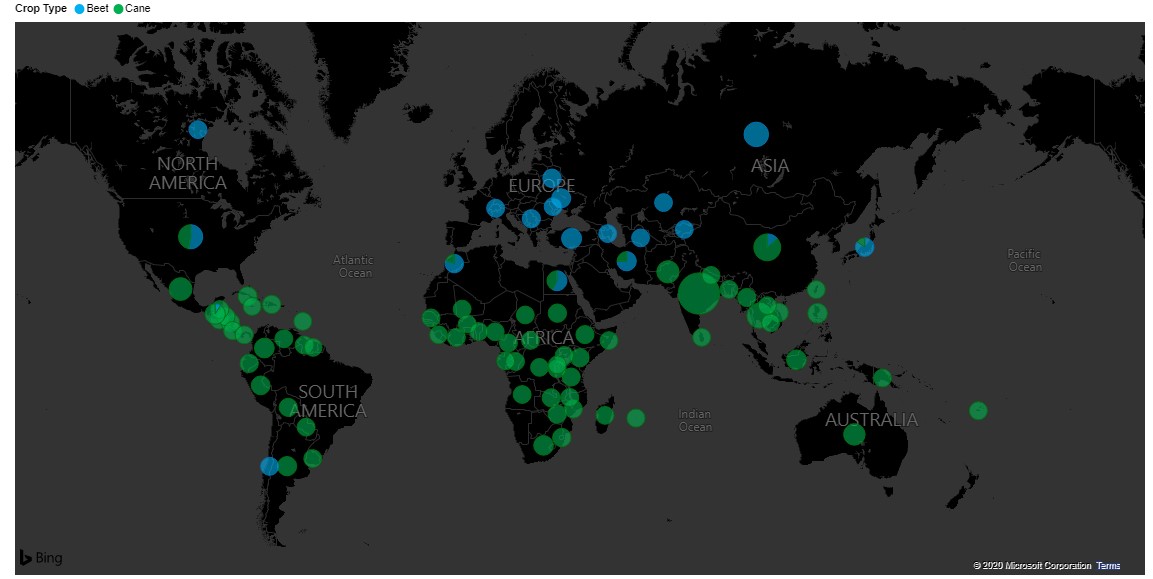 Sugar is made using two key crops: sugar beet and sugar cane. These crops are grown in different regions across the globe, according to their climate, which dictates which crop is grown. A beet crop thrives in colder, wetter weather. A cane crop, however, is the opposite and thrives in warm, tropical areas.

Europe is the largest beet-producing region, whilst Russia is the prominent grower. Beet is also some grown in smaller quantities in Southern China and the USA. The crops are naturally hindered by adverse weather conditions. The major risks tend to be flooding, freezing and snowfall. All of these extreme conditions can stunt the beets’ development.

Brazil and India are the world’s two largest cane-growing regions. There is a great deal of cane grown in Thailand and China as well. The crops in these regions face trouble when it is too hot. Extreme heat and a lack of rain leads to drought, which then impacts the extent to which the cane can grow. However, it’s not all bad when this happens. Although this weather leads to far smaller cane crops, the extreme heat can increase the sucrose yields stored within the cane.

Brazil is the world’s largest sugar producer (historically). It is also a major net exporter of raw sugar, having exported 18.3m tonnes of raw and white sugar last season; this covered 62.7 of global shipments that year. Despite this strong export flow, Brazil still covered its domestic demand of 9.9m tonnes without having to import.

Brazil’s market changes a lot, however, as producers switch between making sugar and ethanol, depending on the cane crop progress and which would be the more profitable decision. This switch changes production by around 10m tonnes (or around 30% of the maximum production) and leads to a variable overall sugar production figure.

India is the world’s largest consumer of sugar. And in recent years, India became a close competitor with Brazil for the top producer spot, now producing around 30m tonnes annually. Given their massive consumption and production, the industry is very large in India. There are roughly 50 million farmers and millions more workers, all involved in the sugarcane farming industry.

The key production regions are Maharashtra, Karnataka and Uttar Pradesh. And with approximately 500 mills in operation spread across these regions, they produced 23m tonnes last season and are on track for around 27m tonnes of production, come the end of this season.

The Indian Government control the country’s export flows and domestic stocks via export subsidies. These subsidies encourage domestic producers to sell their sugar onto the world market, rather than the domestic market. This means foreign importers pay less than the domestic consumers. These subsidies are put in place because India overproduce sugar. However, exports are not viable when the world market prices are too low. Some countries, such as Brazil, have launched a WTO challenge against these export subsidies, as they believe they mean other players in the industry cannot compete fairly.

The EU is the world’s largest producer of beet sugar. However, beet sugar only represents around 20% of the world’s total sugar production. Much of the European production occurs in the northern half of Europe, where the climate is more suitable. Notable regions include France, Germany, the Netherlands, Belgium and Poland. On top of beet production, the EU also refines imported raw sugar, only to a much smaller degree.

Until October 2017, the EU had a production quota of 13.5m. Once the quota was removed production shot up to over 21m tonnes before lower prices caused farmers to reduce their beet acreage. Production since then has been between 17 and 18m tonnes.

China is the world’s third-largest sugar producer, after Brazil and India. It is mostly a cane-producing region, but it produces beet as well. Guangxi is the dominant cane and sugar producer, accounting for 65% of sugar production in China.

Its sugarcane industry has encountered serious issues over the past decade, however, as the costs of labour have increased due to the manual harvesting process. China is now playing catch-up, as it tries to mechanise its process to a larger degree, in line with other producers across the globe (such as Brazil).

Thailand is the world’s second-largest exporter of sugar, after Brazil. Last season alone, they exported 7.7m tonnes of raw and white sugar. They do not import sugar. Thailand’s production is often driven by Government incentives. In 2010, the Thai government introduced incentives which encouraged rice farmers to switch to growing sugar cane. It’s often the case that if one crop is more profitable than another, farmers will switch the producing that (where possible).

Unfortunately, Thailand’s sugar producing industry has seriously increased the levels of air pollution in the country. This is because their cane is burnt as part of the harvesting process, in order to make it easier to handle upon harvest. In addition to the increased CO2 emissions, the cane emits acidic particles into the air, having adverse impacts on human health and the overall air quality.

However, burning is only carried out when the harvesting done through a non-mechanised process (ie. being handled by human beings). Mechanical harvesting does not require field burning. This is naturally a more expensive process, however, due to the machinery involved, meaning much of Thailand’s cane is still harvest manually.

At present, mills are still able to purchase burnt cane, as there is no Government policy in place to restrict this. This is set to be phased out by 2022, however. The aim is to restrict burnt cane to 50% of total cane. There will be a penalty for any cane purchased beyond this, hopefully lessening the environmental impact of this crop

The world market dynamics can change on a seasonal basis, if not more frequently. Adverse weather conditions, new or changing Governmental policies, and even global pandemics can have detrimental impacts on a country’s sugar production and trade flows.

For daily coverage of global production, demand, imports and exports, you can sign up to Czapp.com for free today.