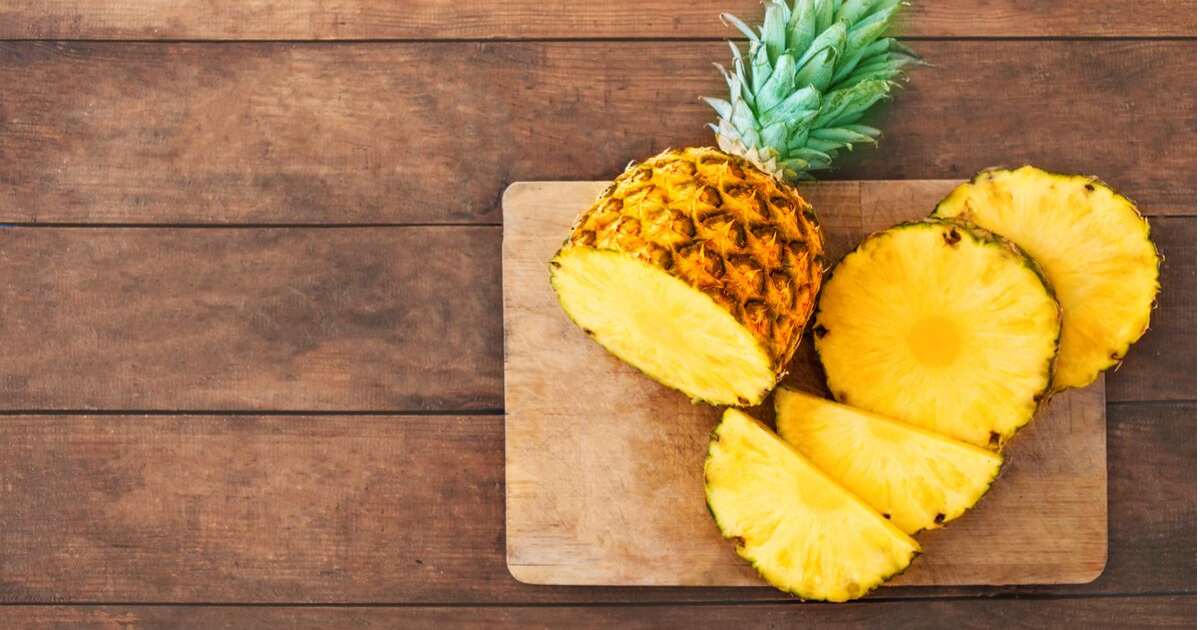 Pineapples are now a common sight in most supermarket aisles, but this was not always the case. This spiky-headed fruit has one of the most interesting histories of all our ingredients, and its maintained presence as one of the most popular fruits makes it an interesting one to work with.

Though grown in their native South America for centuries, the pineapple’s arrival in the Caribbean Island of Guadalupe was what led to its fame and began its long history as a popular commodity. It was here that the fruit was ‘discovered’ by Christopher Columbus in 1493, and when he and his crew took the fruit back to Spain their sweetness and exoticism shot pineapples right to the top of the market.

Initial attempts to grow pineapples in Europe were a failure however, and pineapples imported across the Atlantic Ocean arrived bruised and rotten. Much shaking of fists ensued. It wasn’t until the mid-17th Century that pineapples began to be grown in hothouses in the UK and The Netherlands, with conditions mimicking the heat and humidity of South America. Growing under these conditions was no mean feat, and the low supply of pineapples produced in this way coupled with a very high demand meant that only the very wealthy could count pineapple as part of their diet.

Pineapples came to symbolise a decadent lifestyle, so much so that they were used more commonly as centrepieces on the tables of rich colonists and only eaten once they had begun to rot. Delicious. The opulence of the pineapple was so extravagant that a pineapple rental market was born, allowing those who could not afford to buy a pineapple to rent it for a night of showing off. Those who rented the fruits would place them rather un-subtly about their homes, or carry them to parties in order to advertise their apparent wealth and respectability.

Indeed, pineapples were so popular that many icons were made for pineapple-worship. Pineapples were carved into buildings, painted onto wallpapers and stitched into fabrics. Pineapple ornaments became common, with the most popular being pineapple shaped porcelain decorations that were rife in the 1760s. In fact, there is a famous golden pineapple on St Paul’s Cathedral designed by Christopher Wren right next to our London headquarters.

Pineapples did not become readily available until the 1900s when James Dole (also known as the Pineapple King) established the Hawaiian Pineapple Company, later to become the Dole Food Company. From this point, pineapples could be produced with relative ease and traded across the world. The Hawaiian Pineapple Company also led many people to mistakenly think that pineapples are native to Hawaii, and Hawaiian pizzas have only continued to add to this confusion.

It was in fact only the island’s perfectly temperate climate and rich soil that made it the home of the pineapple. Until the late 1800s sugar cane was Hawaii’s biggest homewgrown commodity, but the shortcomings of a non-diversified crop were proven during an unproductive, barren year. Dole’s choice of pineapples as something new was an enormous success, leading his company to dominate the pineapple industry for most of the 19th Century – a long way to go from his garage, where he first started canning the fruit. The popularity of Dole’s produce led him to expand hugely, and it he who popularised canned pineapple. Dole helped the evolution of pineapple from luxury commodity to readily accessible ingredient.

Pineapples continue to be a very popular fruit across the world, and a complex supply chain supports their trade. Historical trade networks enable Belgium and The Netherlands to dominate import and re-export in the European Union. Ghana is increasing its exports, and South Africa grows and consumes its own pineapples. Costa Rica currently dominates the supply chain as the world’s largest exporter of pineapple. Brazil, The Philippines, Thailand, Brazil and Indonesia closely follow.

Despite supplies being impacted by climate, as they were in 2016 and 2017 by heavy rains in Costa Rica, pineapple continues to be a lucrative business. Market growth in Asia, mainly due to population growth and increased income in addition to the promotion of a healthy diet and added-value products in the fresh market, has led analysts to predict that the product’s demand will continue to grow. E-commerce and the development of improved storage technology has made pineapples more readily available, which many think will also drive demand in years to come.

Properties: pineapple has a long shelf life while chilled and frozen, and is traded in contrate form, pureed, finely crushed and in pieces.

Quality Assurance: The basic quality assurance factors taken into consideration are colour, flavour and smell and Brix level. The desired colour is golden yellow to amber and the taste and smell are required to be free from other interfering tastes and smells. Brix level is the measurement of sugar content in an aqueous solution, and pineapple juices used by bottlers are typically around 60 – 61 Brix.

There are also additional quality requirements: pulp content, acid level and brix to acid ratio. In concentrated pineapple juice 6-18% is commonly used as a guide for pulp content, and 2-4% of citric acid is the usual acid level that is required. Acid level can vary depending on pineapple variety and producing country, which can complicate the issue. Brix to acid ratio is another important quality assurance factor, but again this depends on pineapple variety.

That concludes our overview of pineapples. Do keep checking our Opinion page to find out more about the other ingredients we work with.