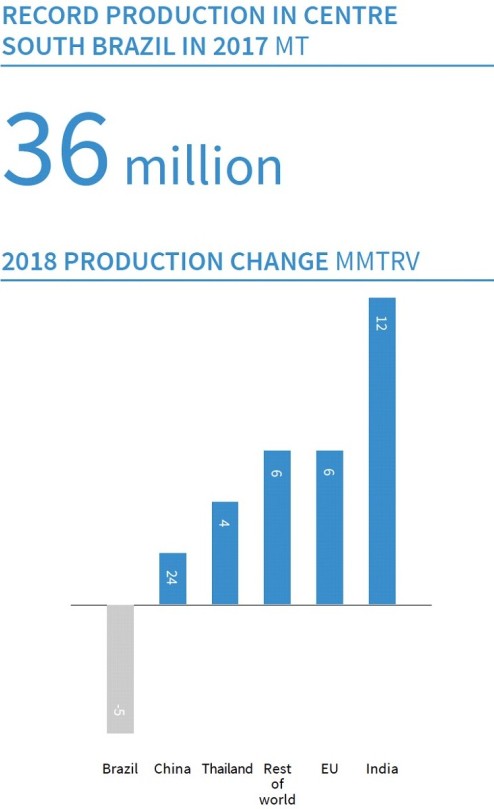 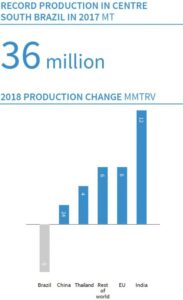 2017 was characterised by extremely difficult trading conditions. Many major trading houses were poorly positioned throughout the year, which led to an accumulation of losses.

In the first half of 2017, the raw sugar market price fell from above 20USc/lb to lows of near 12.50USc/lb in a gradual downward trend that saw little respite. This was driven by a transition back towards a surplus market after a year of tighter supply in 2016. The severity of the price collapse was unusual given that India recorded its worst crop in seven years and China remained in domestic deficit.

The collapse of prices may be partly explained by the stagnation of global sugar consumption, which recorded zero growth globally for the first time in at least 30 years. Events in India and China impacted local consumption and, with a combined population accounting for over 40% of the global population, had a knock-on global impact:

> At the end of 2016, the Indian government announced a demonetisation programme, which led to 80% of banknotes being withdrawn from circulation. In a country which is still largely cash-reliant, this hampered payment for goods (including sugar) in 2017, and affected consumption.

> Chinese sugar consumption was affected by strong domestic prices. The government has maintained white sugar prices above the mills’ cost of production (i.e. above US$900/MT) to ensure farmers are paid for their sugar cane. This artificial price support resulted in cheaper sweeteners – and not sugar – capturing almost all of the overall consumption growth in 2017.

The price collapse was all the more remarkable as it came during a strong downward trend in the valuation of the US dollar. Normally a weak dollar is positive for commodity prices, but sugar ran against this trend in 2017. This was a bad combination for the Brazilian sugar mills, as it meant that prices in Brazilian real fell rapidly, leaving those with outstanding pricing unable to hedge above the cost of production. As we moved into the second half of 2017, sugar market pricing carved out a new range. To the upside, attempts to push towards US16c/lb were met with strong producer hedging activity.

Meanwhile, repeated attempts to push to fresh lows below US13c/lb were absorbed by consumer buying, despite speculators moving heavily to the short side of the sugar market. In the end, their risk appetite was not sufficient to record fresh low prices. Despite their difficulty in completing hedging for 2017 (let alone securing any forward pricing for 2018), the Brazilian mills’ commitments to supply the trade meant that record sugar production was achieved in the Centre South, at 36 million MT. This helped renew the bearish tone in the market.

The white sugar market was a major contributor to the bearish outlook. The deregulation of the European sugar sector was the major sugar market story of 2017. For the first time in more than a decade, European sugar exports were unrestricted. European producers responded with a large increase in beet acreage, and European and world market prices converged. Meanwhile, refiners around the world steeled themselves for a battle for a share of the white sugar market; in Q2 and Q3, raw sugar off-take was phenomenally strong as refiners maintained a high throughput. This put pressure on the white sugar premium (the premium paid for white sugar over raw sugar), which fell from highs of US$115/MT to lows of US$53/MT in 2017.

Finally, the market in 2017 was characterised by extremely difficult trading conditions. Many major trade houses were poorly positioned throughout the year, which led to an accumulation of losses. Senior sugar traders departed from a host of specialist and generalist traders alike, with many of these businesses having since decreased their risk appetite for sugar trading

Excellent weather conditions and widespread government support for sugar cane farmers mean that the sugar market is likely to remain in surplus for at least the remainder of 2018. In particular, the white sugar market is heavily oversupplied. The EU has produced a surplus of more than 4 million tonnes, Pakistan is subsidising 2 million tonnes of white sugar exports and the Indian government is under pressure to facilitate sugar exports. This white sugar oversupply is likely to continue to put pressure on destination refiners. If their raw sugar demand decreases, the white sugar surplus could be pushed into the raw sugar market, pressuring raw sugar spreads.

In the middle of the year, the market will focus its attention on production in Centre South Brazil, the world’s largest producer of sugar. At current prices, mills are likely to maximise ethanol output, rather than raw sugar, which could see production fall from 36 million tonnes towards 31 million tonnes. This will help reduce the global sugar surplus, but probably will not be sufficient to resolve it. Meanwhile, sugar prices in Brazil remain below the cost of production, which – given the cane industry’s financial footing – is a major concern. More mills are likely to seek bankruptcy protection this season. The mills’ decision to prioritise ethanol production will remain heavily dependent on the USD/BRL exchange rate, global energy prices, and Petrobras, which continues to link domestic gasoline prices with global gasoline markets.

Become one of our 2022 interns