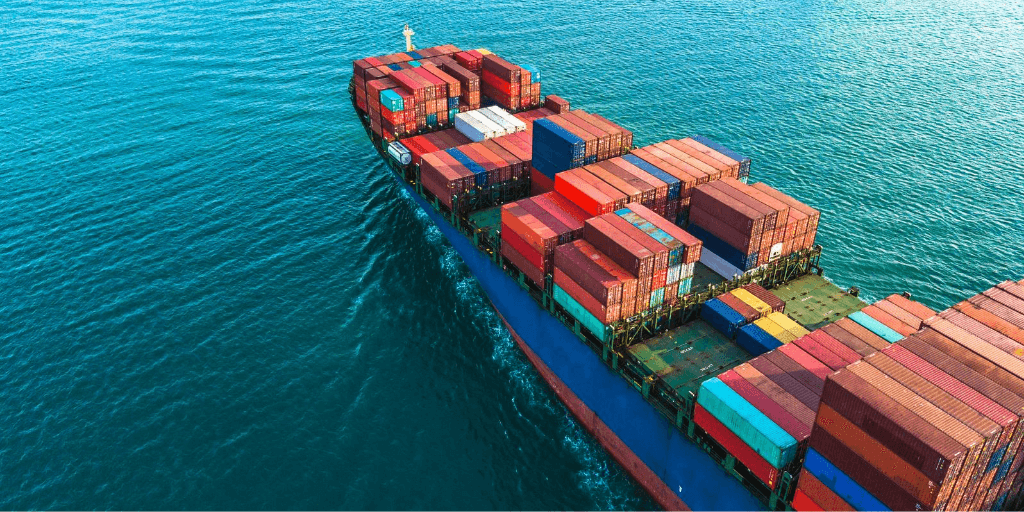 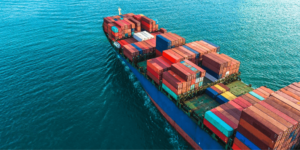 The world’s commodities are largely transported by sea, specifically on container ships. For the last three years the cost of container freight has garnered much attention and frustrated many in the supply chain industry. Before we explain the circumstances that caused the cost of containerised freight to reach an all-time high in September 2021, let us dive into the fundamentals of containerisation first.

What are Container Ships?

Container ships are maritime vessels that carry cargo containers, also known as intermodal containers. Sometimes you will hear them called ‘box ships’ because they carry boxes of cargo. Container vessels typically operate on a regularly scheduled set route, this type of shipping service is known as liner shipping.

Container ships dominate maritime shipping because most goods need to be shipped in intermodal containers, especially consumer or ‘final’ goods. When it comes to agricultural products, it is usually things that are fit for human consumption or have already been through some sort of processing that are loaded into containers, like refined sugar. In the last decade the number of container ships in the global merchant fleet averaged around 6000 per year.

The History of Container Shipping

Containers are one of those simple inventions that drastically changed how the world works. The big steel box was introduced to the freight industry in 1956 by American trucking business owner Malcolm McLean. McLean’s patented design became the International Shipping Organisation (ISO) standard shortly after its advent. Now a time when commodities were transported in sacks seems like a fever dream to most.

Once containers became the hottest thing in global trade, the ships that carry them started getting bigger. The early container ships were around 38 ft long with a capacity of 500 – 800 TEU (more on that later), today the smallest containers in use measure 45 ft in length.

The capacity of a container ship is measured in TEU (twenty-foot equivalent units) referring to the length of a 20 foot (approximately 6.1m) long container. The full dimensions of a standard container is 20 x 8 x 8 ft. As well as the 20 ft containers, the freight industry uses 40 ft containers, this means ship capacity can also be given in forty-foot equivalent units (FEU) i.e., one FEU counts as two TEU. Another important metric for ships is deadweight tonnes (DWT): how much weight a ship can carry including cargo, fuel, passengers and other equipment.

Did you know that 40-foot containers have recently been co-opted as tiny homes because of rising house prices around the globe?

Types Of Containers and cargo

The ISO standard intermodal container is designed to be transferred between modes of transport, it can go on ships, trucks and rail. Refrigerated containers, also called ‘reefers’, transport cargo that needs to be temperature controlled, like fruit and vegetables. Reefers are fitted with a generator to keep their contents cool. ISO standard reefers have heating and cooling mechanisms and are the most common type of reefer.

There are two broad categories of general cargo:

A feeder vessel carries boxes that will be loaded onto the mother vessels. They are used to carry cargo through small inland waterways that larger vessels cannot pass through, or used on smaller regional flows from hubs, where it is not efficient to deploy a larger scale vessel. Sometimes Feeders are used for short voyages. Barges are flat top vessels that pass through canals and on rivers and are small than feeders.

The feedermax is the ‘midsize’ freight ship. With a capacity of 3000 TEU it can carry a good amount of cargo while still being able to navigate narrower straits and other small bodies of water. The average feedermax is 170 – 200 m long.

Panamax vessels are named after the canal that they were designed to sail through. Measuring 950 ft long and with a capacity of 4,000 – 5,000 TEU, or 65,000 – 80,000 tonnes (DWT), these vessels are the largest that can pass through the Panama Canal, the waterway that connects the Atlantic and Pacific Oceans. The Panamax was launched in the 1980s, when globalisation was growing and consumerism in North America was on the rise. Today the Panama Canal sees around 14000 ships traverse its waters in a year. But the issue with the Panamax is that it is a tight fit. This makes it challenging for personnel operating the canal’s water locks – the mechanisms that help the vessel cross by lifting it onto the artificial lake of the canal. Ships take an average of eight hours to traverse the Panama Canal.1

You can probably guess how we got the Suezmax. The largest ship that can pass through the Suez canal is a little shorter than the Panamax at 900 ft / 275 m long and 180m wide. However, it carries 120,000 – 180,000 DWT, or around 9000 TEU. Since the Suez is the number one waterway for global trade, the Suezmax grew in popularity. This type of tanker usually transports crude and fuel oil on long haul routes.

Custom built to navigate through the shortest route from East to Southern Asia, the Malacca Strait, is the Malaccamax. The ship was created in response to new regulations limiting the draught (draft) of ships to 25 ft. The draught is the distance between the waterline and the keel of the ship’s hull.

Ultra large container vessels are a class of container ships that cannot pass the locks of the Panama Canal. They can be further categorised as a Post-Panamax, Post-Suezmax, or Post-Malaccamax.

Following the success of the Panamax, the Post-Panamax was introduced. The Post-Panamax is in the league of a relatively new type of vessel – the cellular vessel. These ships are designed to carry ISO standard freight containers stacked on top of each other. Post-Panamax ships have cell guides running through the hold and sometimes up to the deck. This design is intended to reduce the amount of cargo that falls off ships. Loading thousands of containers onto a vessel is a technical feat and not always done perfectly, causing goods to go overboard, but sometimes rough seas are to blame.

The largest container ship in the world

The Post-Malaccamax is the largest type of container ship. Title of ‘the largest container ship in the world’ goes to the Ever Ace, at 1312 ft/ 400 m long and with capacity for nearly 24,000 containers (23,992 to be specific). The ship was built in 2021. The Ever-Ace set sail on its first voyage from Qingdao Port in Shanghai, calling in at Rotterdam, Europe’s largest port, in June 2022.2 It did not break the world record for its length but for the number of containers it carried.

The Ever Ace is owned by the same company that owns the Ever Given, a vessel that is famous for a different reason.

How many containers on a container ship?

It depends on the ship. The logistics team for a trade will consider the product, route, distance, and duration of a voyage when choosing a vessel for their containers. This means that there is not one type of container ship that dominates commercial shipping. So, the better question is ‘how do shipping lines decide which vessel to allocate to which service?’ because once a vessel is allocated, the shipping lines will look to maximise the utilisation of that vessel by loading as many containers as they can.

Why is container freight so expensive?

The story goes like this: the outbreak of COVID-19 caused a container shortage because some ports shut down, either because personnel were sick or because countries closed their borders to limit the virus’ spread, this meant that ships and containers were stuck at ports or re-routed. When a ship is unloaded it leaves some containers at the port and picks up others. Since ships were not able to dock at some ports, a lot of containers were abandoned. In short: many of the world’s containers are not where they need to be. In the first quarter of 2021, shipping lines reported operating profits ranging from 500-970 USD/TEU because demand far outweighed supply.

You may be wondering ‘why can’t we just make more containers?’ Manufacturing of containers increased by 80% in the last months of 2020 because of strong demand. However, the price of steel and flooring materials that are used to make containers has also risen. This means producing more containers is not always a viable solution. Shipping lines are also planning to invest in more vessels, but this complex process is unlikely to impact the situation positively until 2024.

In mid-2021 shipping lines tried to reposition containers to Asia’s busiest ports because Asia is the global production hub for white goods. However, that exacerbated equipment shortages for most regions outside of Asia. These events produced the supply chain bottleneck the industry is still dealing with now.

The main reason containerised freight rates have remained high is because of the surge in North American consumer demand for Asia-made goods and persistent port congestion. Delays in shipping materials needed to produce consumer goods compounded with limited or no access to the countries that produce those materials create backlogs. Due to production backlogs, laden containers ended up being used as storage units for months on end, which of course contributed to the shortage of containers.

The future of container vessels

Containers ships have become significantly larger in the past twenty years. In the 2010s the average container ship size was just under 3000 TEU; now, it is around 4500 TEU. Shipping lines started building bigger ships to lower the cost for clients, thus making their services more competitive. A larger ship can take more containers on the same voyage which means the cost for each container does not need to be as high for the carrier to make a profit. Larger vessels also cut fuel costs for the industry as a whole. You can start to see why bigger vessels were positively received at first. But then the vessels just kept getting bigger.

The benefits of a ‘bigger and better’ ship diminishes with each new iteration. The two main reason are: there is a limit to how many containers you can stack on top of each other before the weight crushes the bottom containers; and larger ships are more likely to get stuck. After the Ever Given-Suez Canal fiasco of 2021, more attention was given to the trouble with manoeuvring big ships. The Ever Given is an ultra-large container vessel (ULCV) that is 400 m/ 1312 ft long. Most ULCVs were built in the last seven years yet they struggle to fit in most of the world’s ports and waterways – even the most crucial ones like the Panama and Suez canals. Very few of these vessels have ever called at US ports due to their size, which is an issue because the US is one of the world’s largest importers.

But logistics is not the only concern. The question that most consumers are asking is ‘can container vessels co-exist with a climate-positive future?’ Big ships use a lot of fuel, specifically crude oil, which emits sulphur species into the atmosphere. The International Maritime Organisation has placed a cap on the use of high sulphur fuel to reduce shipping related pollution. Most shipping companies have swapped out high sulphur fuel oil for very low sulphur fuel oil (VLSFO) to meet the requirements of the IMO 2020 sulphur cap. Replacing existing ships with ships that run on renewable fuels is not yet a viable solution because it is expensive, plus there are concerns that they will not be as efficient which means they could have longer voyage times. Other solutions for reducing the environmental impact of shipping range from cleaning the hull, to redesigning the ship, to opting for rail. Learn more about the future of sustainable shipping with our blog on the topic: Sustainable shipping: what the world’s freight industry is doing to improve (czarnikow.com)

Do you need to move large volumes of agricultural cargo? Contact us today.