Back to main blog page
Ask the Analyst: Czapp’s community 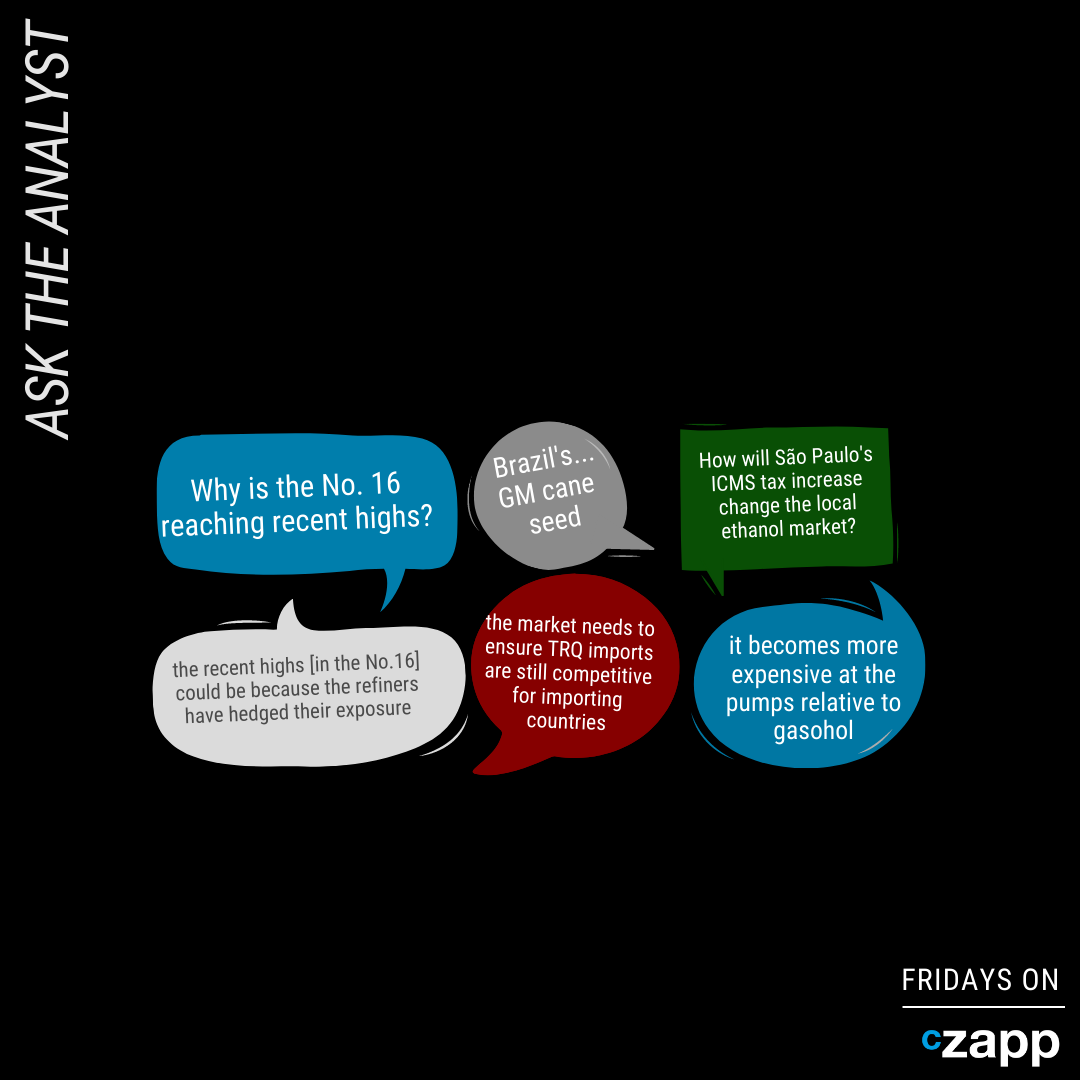 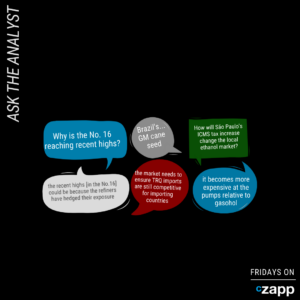 This month, we launched ‘Ask the Analyst’ on Czapp. It’s an opportunity for users to ask our analysts any questions about the world sugar, ingredients and energy markets. Every Friday, we share their answers. Here are the first few questions rounded up.

Why are we seeing an increase in the No.11? Could this persist into Q2?

The strength in raw sugar started in 2020 as major buyers took advantage of decade-low prices below 10c. Raw sugar offtake in 2020 was 39.7m tonnes, the most ever. This was supplemented by heavy speculative buying, and finally by Trade Houses becoming more positive on the market towards the end of the year.

As we move into 2021, the world sugar market is grappling with a lack of supply. Europe and Thailand are the world’s two major low-cost refined sugar producers, but both had poor crops in 2019/20, leaving a shortfall in refined sugar supply. Meanwhile, everyone expects the Centre-South Brazilian cane harvest to be lower in 2021 than it was in 2020 due to dry weather. This shortfall in supply means prices have risen to try to ration demand.

I do wonder who buys the market now we are at 17c. Speculators hold a large long position in sugar. In the past, it’s been difficult for them to sustain a gross long of more than 30% of open interest, which is roughly where they are today.

The trade is now mostly positive the sugar market. This leaves consumers and producers as possible sugar market buyers. Consumers have had to adjust to higher prices, which I think means that their buying is becoming more hand-to-mouth. You can see that in their futures positions today; they are buying as the March’21 futures expiry approaches. The market hasn’t given them enough opportunities to cover large tonnage at attractive prices.

Meanwhile, it’s possible producers have to buy back hedges in the event of crop failure, which is why everyone is so obsessed with Brazilian rainfall right now. Will the cane crop be 580m tonnes, or perhaps significantly lower?

Because we can’t really identify a large buyer of futures today at 17c, we worry a bit about the price path in the short to medium term. Longer term, we remain quite positive to the sugar market; it’s going to be difficult to reverse a decade of underinvestment in production, so the undersupply will probably persist.

Sugar consumption was hit in many regions thanks to COVID lockdowns, which reduced out-of-home consumption. Soft drinks were the major casualty as bars, restaurants, theatres, cinemas and sports events all closed. However, snack food sales increased during this time, reflecting a shift in consumption as people stayed at home. We also saw in the second half of 2020 that the world learned to adapt to COVID, so sugar consumption started to revert to normal.

The scale of the consumption loss varied by country. Key factors were the scale/strictness of the lockdowns, success in combating COVID, existing dietary habits and also whether sugar was the primary sweetener in soft drinks.

If there’s too much sugar in the US and their problem now is how to limit supply, why is the No.16 reaching record highs?

Firstly, it’s important to note that the No.16 is very illiquid, so the price movement is not necessarily that strongly related to the domestic market. In fact, most buyers negotiate on a flat price basis for the year and don’t use the No.16; it’s mostly used to hedge raw sugar imports under the Mexican quota and Tariff Rate Quotas (TRQs).

As such, the recent highs could be because the buyers (the refiners) have hedged their exposure, knowing a certain amount of sugar would be coming their way from Mexico, but sellers in Mexico have not started selling into this yet.

On the other hand, the market also needs to make sure TRQ imports are still competitive for importing countries, especially with the rise in the No.11. If I were a world market and TRQ holder currently, I’d look to export to the world market in March, and TRQ come July to maximise returns. The function of the No.16, in this case, would be to ensure the US market remains attractive to quota holders.

Will British imports of raw sugar have a meaningful effect on the Brazilian shift to genetically modified (GM) cane seed?

The new British raw sugar quota is small enough, at 260k tonnes, that it probably won’t change Brazil’s move to increasing its use of GM cane seed. This move is part of Brazilian plans to increase their agricultural efficiency, so any one buyer is probably not significant enough to change policy by themselves.

In some countries, consumers/lawmakers care a lot about whether GMO cane is used to make sugar, even though the sugar itself contains no genetic material. Other countries do not have the same stipulations. Refiners who find it difficult to accept sugar made from GMO cane may need to adapt their supply chains in the coming years.

What factors dictate whether or not we see Thai cane production rebound next season?

The Thai crop will be heavily scrutinised this year.

Over the last two seasons, we’ve seen a significant decline in cane production across the country.

The major factors contributing to this have been poor rainfall and increased competition from the more profitable cassava.

However, we think the Thai cane crop will rebound in 2021/22, but for this to occur, we must see high plantings and consistent rainfall, both of which we’ll be monitoring closely.

Cassava’s returns have been falling across the last few months, whilst those for sugar have been increasing. At today’s prices, farmers are strongly incentivised to plant more cane, and we believe many will. However, Thailand’s cane farmers are usually responsible for very small farms, meaning it’s hard to 100% rely on their operations running smoothly…

On the weather front, the Thai Meteorological Department thinks rainfall between February and April to be 20% above average. This bodes well for cane development and yields in the 2021/22 season. The only exception to this is in the Northeast, where rainfall should only be 10% above average; the Northeast is Thailand’s main cane-producing region.

How do you think Mexico’s sin tax and labelling laws will impact the country’s sugar consumption?

So far, it’s been hard to measure the impact these measures have had on Mexican sugar consumption, but it looks as though there’s mixed results.

When the tax was first introduced, we noticed a dip in consumption as prices for these products increased. We’ve also saw some product reformulation, as soft drink producers started using HFCS in their recipes, rather than sugar.

In the longer term, soft drink consumption seems to have recovered. This may be because consumers have grown accustomed to the new prices and decided the product is not too expensive to dissuade purchase.

The labelling laws are perhaps too recent to properly assess, but sugar consumption did decrease in 2020. How much of this was due to consumers’ reacting to the label, we do not know. Mexico’s domestic sugar price was at a record high, though…

It’s poor 2019/20 cane crop meant sugar prices shot up, which is the likely reason we saw reduced consumer demand back then.

Do you think Bolonsaro’s recent ousting of Petrobras’ CEO will have a wider impact on the sugar industry? If so, how?

The change in Petrobras’ CEO should only impact Brazil’s sugar and ethanol industry if its fuel price policy changes.

The result was two seasons of heightened ethanol production. Of course, low No.11 (raw sugar) prices contributed towards this too, but if the International Parity Policy was not in place, ethanol prices would not have been able to climb.

Whether this policy will change is unclear, but we can see the pressure is rising from all sides.

The worst-case scenario is gasoline prices could be capped by the Government. This would have little impact on the 2021/22 season, as the mills have already committed to maximised sugar production. However, ethanol returns could be hit and reduce the millers’ potential revenue.

In the long run, any strength in the energy market won’t likely be reflected in Brazil’s ethanol prices, and large swings in its production mix could become a thing of the past.